The Galeon Andalucia headed out into the Atlantic Ocean on May 19th 2013 after a hugely popular week-long visit to Fort Lauderdale. The ship was in Florida as part of Viva Florida 500 and arrived following the route that 1th century trading ships commonly followed. The ship left Tenerife, and sailed via Puerto Rico and Dominican Republic before arriving on our shores.

It was an honor and a privilege for me to be invited to join Capitan Manolo Murube and the Andalucian crew of this amazing vessel as she sailed for her next port of call along the Florida coast –  St. Augustine.

My aim was to document the experience with images made and edited entirely on iPhone5, during a trip that saw all kinds of weather, fed by a cooling easterly breeze and the flow of the gulf stream off the eastern coast of Florida.

Standing on the quarterdeck of this stunning wooden vessel it is hard to believe that the Andalucia was built just four years ago by the Nao Victoria Fundacion in Seville Spain. A magnificent 495 ton, 170 foot 1:1 replica of a galleon that was part of Spain’s fleet to Florida. 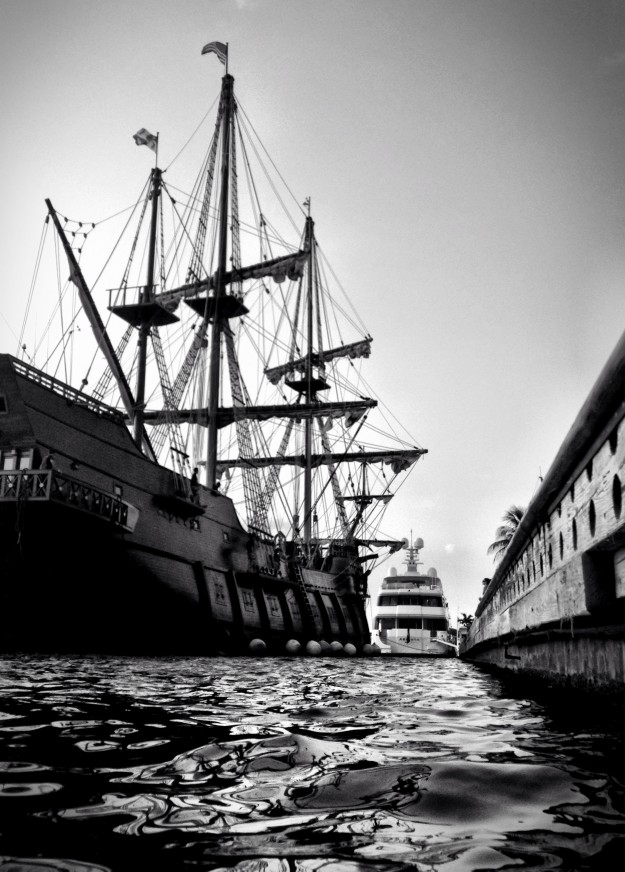 A perfect copy of a 16th-century sailing ship with Its maximum speed is 12.4 knots (23 kilometers per hour). It has four masts, seven sails and ten cannons. Galeon Andalucia is primarily wind-powered, but has two built-in engines that are used when necessary. It has a 30-man draft composed of Spanish crewmen.

El Galeon’s stay at Fort Lauderdale was one of the signature events of the state’s celebration of the 500th anniversary of explorer Ponce de Leon’s landing along Florida’s East Coast and attracted thousands of visitors during the visit. The ship is also familiar due to appearances in a series of Captain Morgan Rum commercials, and I’m pleased to report that the ship is very bit as impressive up close.

My own first sighting of the ship was distant. From Lauderdale-by-the-Sea the ship was just a speck on the horizon. Andalucia was heading to meet a pilot boat at 6pm at the mouth of Port Everglades. Soon I was by the rocks at Harbor Isles and it was clear that this was no ordinary tall ship.

El Galeon spent ten days moored along the Intracoastal quay at Bahia Mar Resort, and was open to the public all week – many took the tour free of charge thanks to the Greater Fort Lauderdale Convention and Visitors Bureau who provided 20,000 free tickets. The demand was so great that the CVB’s website crashed – and it is the CVB who invited me to join the crew on Sunday evening. You can read more about the whole visit from a Florida perspective here at the VisitFlorida site. 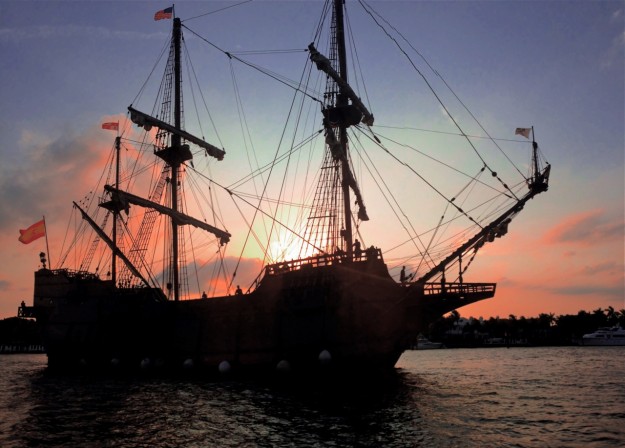 People patiently formed long queues in the heat, and even turned up in costumes – really getting into the spirit of things. I know the crew have been very appreciative of the way that their American visitors reacted so positively to the Spanish flag, flying so prominently off the stern. Hispanic visitors especially felt a positive emotional connection to the ship.

The ship maneuvered swiftly down the ICW along the Stranahan River escorted by pleasure boats. There was no spectacular sunset, but the dramatic contrasts between the ships as we passed through the 17th St Bridge and into Port Everglades, where the Andalucia seemed to tower over the freighters off to our right. A turn to port, past the Point of Americas tower and the rocks of north jetty and we were out in the Atlantic.

The ship sways, the waves roll and the night is upon us. Tonight it’s just the ocean and the north star – right ahead in the evening skies. 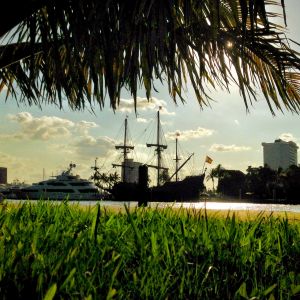 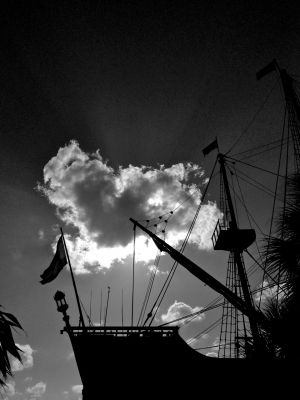 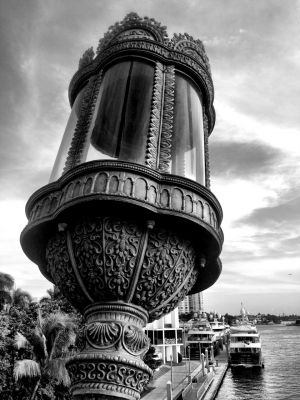 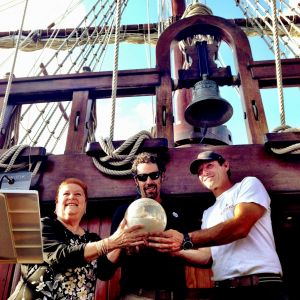 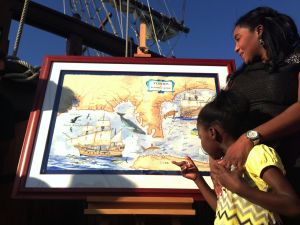 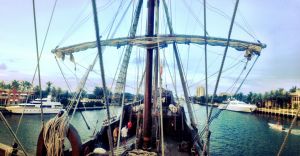 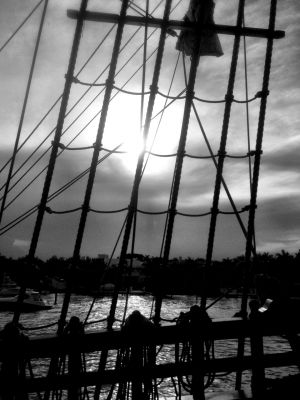 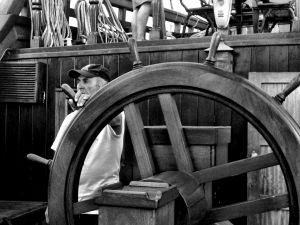 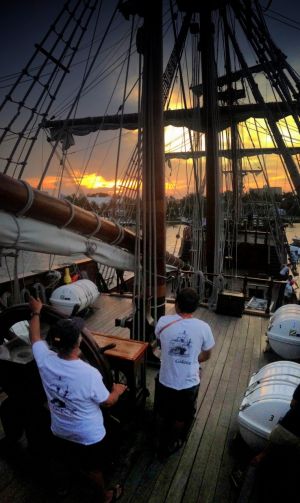 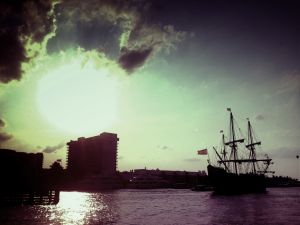 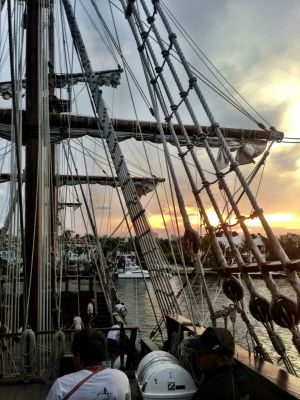 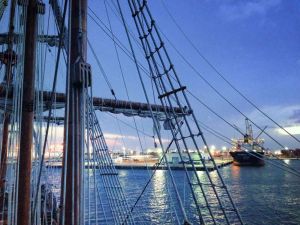 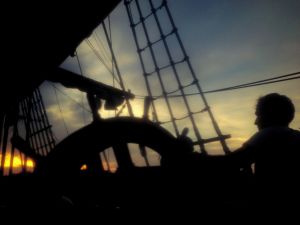 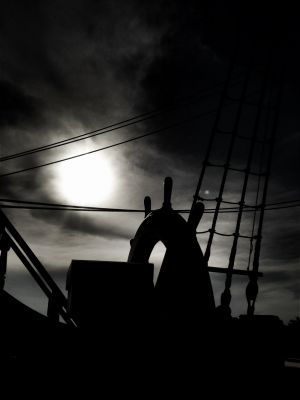