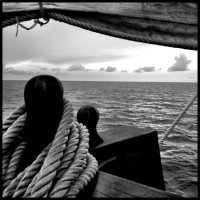 Tuesday dawned with the prospect of a leasurely sail towards St. Augustine, El Galeon’s port for the next week or so. The morning started overcast but soon the clouds began to clear and create. The ship would need to arrrive on a high tide, so there was no hurry at all to take down the sails and look for land.

Talk at first light was of a dramatic midnight storm, but I slept through the whole thing (though a falling tumbler of water splashed my face at some dark hour). In the galley a fine fruit and nut loaf baked on board tempted the team, who politely waited until Solar, the crew member who had created it, was up and ready to share.

It was a genuinely lazy morning with no pressures and no worries. I took myself up to the highest part of the ship (the poop deck, a mizzen mast dramatically secured across the middle) and watched the endless horizon. The day turned out to be glorious.

St. Augustine is the last of only four Florida port stops for the Viva Florida 500 Voyage of El Galeón as it sails a historic route to commemorate Spanish explorer Juan Ponce de León’s 500 years ago.

The ship set sail from Puerto Rico on April 1 and aims to spend 12 days in St. Augustine — May 23 through June 9th. St. Augustine’s connection with Spanish maritime history is strong. The newly appointed Governor of Florida Don Pedro Menendez de Aviles arrived in Florida on the Feast Day of St. Augustine’s Day, August 28, 1565. The soon-to-be fortified Timucuan Indian village he found here was soon renamed in honor of the saint.

Today St. Augustine is a beautful Florida city with a great deal of historic streets and structures. In the 1800’s  the arrival of Henry Flagler’s railroad further enhanced the city. Several decadent hotels including the Flagler Hotel (now Flagler College), the Alcazar Hotel (now the Lightner Museum and City of St. Augustine offices) and the Casa Monica (recently restored and returned to its roots as a beautiful hotel) were constructed.

On deck the crew were busy with final preparations. The great gallery in the stern had been polished and cleaned, wooden stairs re-varnished and the sails were lowered with care. 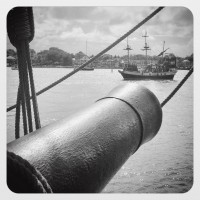 Soon land was visible and the the white sands of Anastasia State Park were clearly visible. The crew gathered on the quarterdeck to watch the approach of welcoming sailing yachts and a police team to help us navigate the shifting sands of St. Augustine inlet.

The entrance to the inlet itself would mean the passing through of St. Augustine’s iconic Bridge of Lions. With a drawbridge almost as wide as the Andalucia it was clear that an adjustment of the masts was necessary. Fore and main masts were angled carefully by some impressive rope work. Soon we were coming about to prepare for docking, with St. Augustine’s pirate ship Black Raven on hand with media and dignitaries and a some songs of welcome. 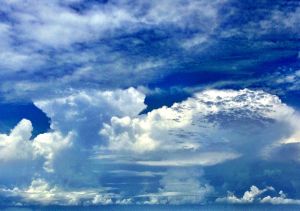 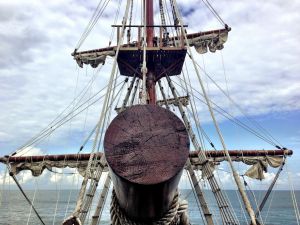 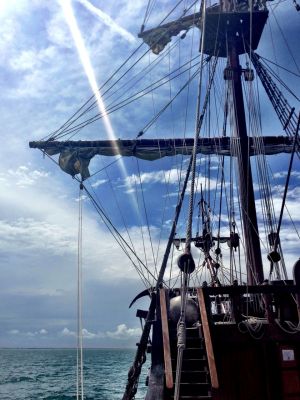 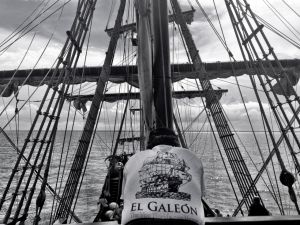 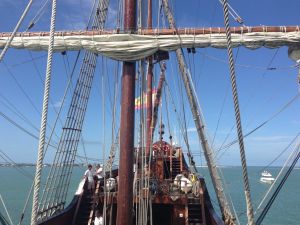 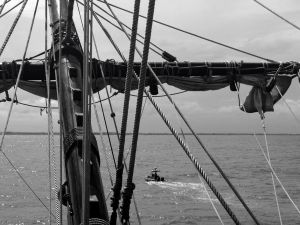 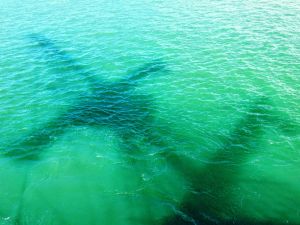 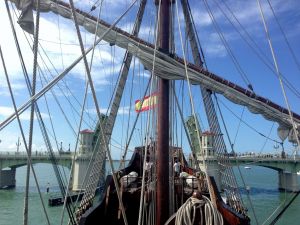 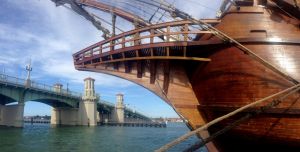 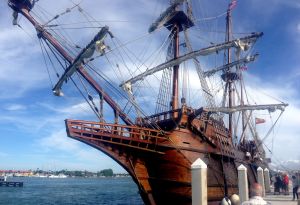 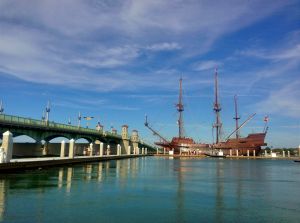